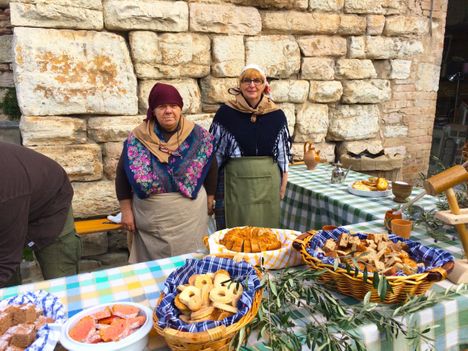 Called the Green Heart of Italy, Umbria is the only Italian region with borders that touch neither the sea nor another nation. A world apart, it is known for its fertile landscapes, soulful lifestyle, and village traditions.

This region is home to the important cultural centers of Perugia (the regional capital), Assisi, Gubbio, Spoleto, Orvieto and Castiglione del Lago among others. Quieter and more discreet than its neighbors Tuscany and Rome in Lazio, it may take a little longer to get to know Umbria, but the rewards are well worth the effort.

Here are our Top Ten Reasons to Visit Umbria:

Festivals.  At local festivals in some of the region’s most charming hill towns, you truly feel like you have stepped back into the Middle Ages.  The Umbrians love to honor their birthplaces and always to share the opportunity to celebrate with local food and drink, of which they are terminally proud.  This winter, we stumbled upon the Sagra della Bruschetta (Festival of Bruschetta) in Spello, which celebrates the end of olive harvest.  Some of the most important medieval celebrations here include: Gubbio’s Corsa dei Ceri (Race of the Candles); Foligno’s Giostra della Quintana (Joust of the Quintana); the flower-filled Infiorata in Spello; and the Mercato delle Gaite in Bevagna.

Frescoes.   Extraordinary feats of religion devotion may be found everywhere in Italy.  But frescoes of this quality are not.  Some of the best are Signorelli’s depiction of the Apocalypse found in Saint Brizio (the cathedral chapel) in Orvieto, Gozzoli’s scenes from Saint Francis’s life in Montefalco and those found in the Upper Cathedral of the Basilica in Assisi by the revered Giotto, one of the first successful masters of painting perspective.

Assisi.   Of the towns we explored this winter on #foodintheboot, Assisi was far and away the most captivating.  A perfect walking city, it is replete with incredible works of religious art and architecture, and striking against the lush facades of the Umbrian countryside.  An invigorating hike out of town leads to the Eremo (Hermitage) of Saint Francis, overlooking the entire region.

Cibo (Food).  Of course we will not get far in any description of Italy without addressing food.  But what makes Umbria special? For one, their olive oil from the Spello and Trevi areas.  The region is also known for its legumes, including the tiny, sweet lenticchie di Castelluccio (lentils from the hamlet of Castelluccio—we have a wonderful recipe using these !), Colfiorito, chickpeas from the Buranese area, and beans from Lake Trasimeno (one of the Slow Food Presidia of Italy, projects that promotes food at risk of extinction).  Two exquisite Umbrian dishes are pasta e ceci (pasta with chickpeas) and pasta e fagioli (pasta with beans).  Other edible prides of Umbria are its cured meats and truffles, both from Norcia, and onions from Cannara (where there is even a local festival to celebrate them).

Vino (Wine).  The best white and red expressions of the region, unsurprisingly, come from some of its native grapes: Grechetto and Sagrantino di Montefalco. The Sagrantino has deep historic ties to the territory and microclimate of Montefalco, and is by many considered a rising star among Italian reds. With ancient Greek origins, Grechetto boasts thick skins, high sugars and late harvest times, making it suitable for dry and sweet wines alike.

Ceramics. The origin of ceramics, we learned, is the Muslim world.  Italyfirst encountered them by way of Mallorca, and the trade commenced here around 1100, where one of the thirteen oldest companies in the world is a ceramics-maker is headquartered in Deruta (we met the 24th generation of the family business—Ubaldo)!  From the twelfth century, ceramics have persisted to the present day:  another Deruta artisan made a ceramic guitar for Santana to play at the Umbria Jazz Festival (which he did). Gubbio is famous for ceramics too, in particular black ceramics, called bucchero, an Etruscan technique where smoke in the kiln and a lack of oxygen caused the dark veneer.

Etruscans.   Sometimes called the original Italians, the Etruscans were the people of central Italy who conquered the Umbri to dominate these lands from roughly the 9th to the 5th centuries BC, before finally merging into Roman culture.  They ruled over a League of Twelve Cities, which included parts of western Umbria including present-day Perugia and Orvieto.

Nature.  Umbria is called the Green Heart of Italy for a reason.  It is trodden far less by tourists than Tuscany, and as such feels far more pristine.  The forests, hills, gentle Apennines and Lago Trasimeno all contribute to this nature-lover’s paradise.

Life in the outdoors.   For walkers, hikers and cyclists, Umbria is ideal.  The Apennines offer quiet roads and exhilarating climbs and descents in lush and verdant environs. (Since the very first Giro d’Italia in 1909, drivers here, and in many other regions of Italy, have come to understand and respect bicycles on the road. Cycling is in the DNA of the people. Nearly every family in Italy has (or knows) at least one cyclist, and so it is a particularly bike-friendly culture.) And locals’ pace of life is slower, which adds to the mood.

The Slow Life.  If Emilia offers the good life, then Umbria offers the slow life.  People take their time.  You will see it in the open market or even at the grocery store, where a transaction becomes a chance for a conversation.  People tend to be good neighbors and to look out for one another.  Charming and cozy, life here is how many of us wish home would be.