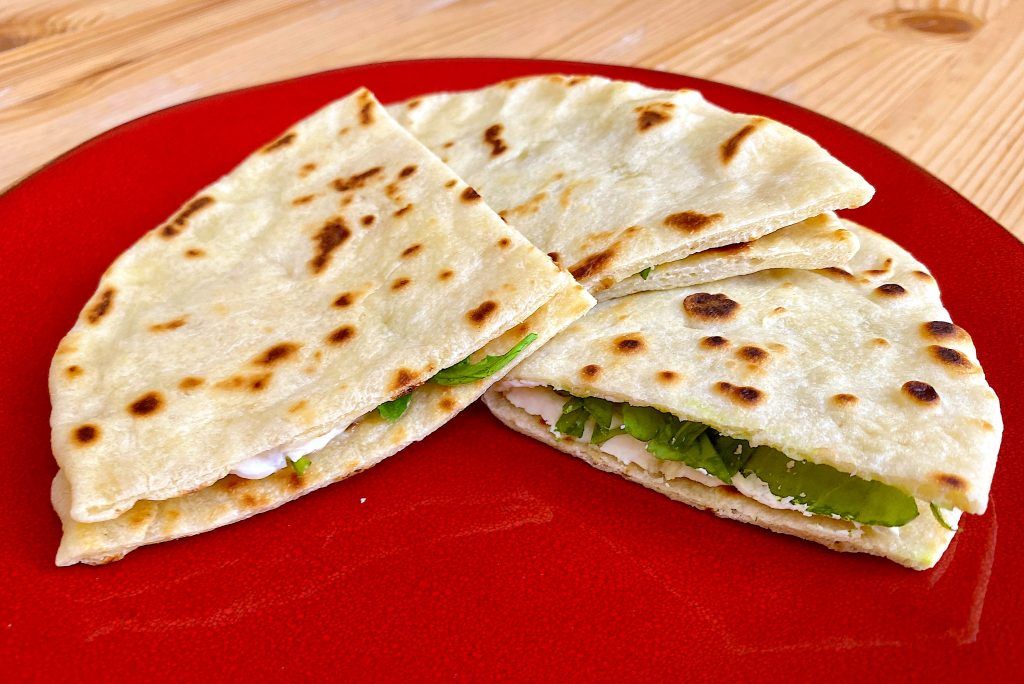 By Luca Antonioli from Emilia-Romagna.

This delicious recipe originally hails from the Emilia-Romagna region. (Italy is divided in twenty regions such as Sicily and Tuscany). Luca here runs his hotel in Rimini with his family and they love to prepare and share typical recipes such as this one with their guests.

More precisely, it comes from the southeast of Romagna, and the provinces of Rimini, Forli-Cesena and Ravenna. (Italy is currently divided in 103 provinces such as Florence and Rome.)

Luca Antonioli is the manager and owner of Hotel Lalla in Rimini, the famous seaside town made so by one of its most famous citizens: Oscar-winning filmmaker Federico Fellini. Luca is passionate about this recipe, and loves to take part in its preparation and service to customers.

A type of flatbread, it can be cooked on a griddle or a pan, and be rolled thinner or thicker. In Rimini, it is made thinner and wider and called "piada". Further north, in Forli-Cesena and Ravenna it is made thicker and smaller and called "piadina". After being cooked, the bread can be stuffed with different ingredients for a delicious sandwich. Other variations of the recipe are called cassoni, crescie, or crescioni, when folded, stuffed, and then cooked.

There is some evidence of fourteenth-century consumption of piada. But it wasn’t until the Romagna-born Italian poet Giovanni Pascoli used the word "piada" in one of his nineteenth-century poems (instead of the dialect "pié") that the term entered Italian culinary consciousness.

Enjoy this recipe in Romagna (where the real version comes from!) or make it at home and feel like you’re in Italy in your own kitchen!

* Ingredients for filling a piada/piadina:

** Ingredients for filling a cassone verde (see picture below):

** Ingredients for filling a cassone rosso: