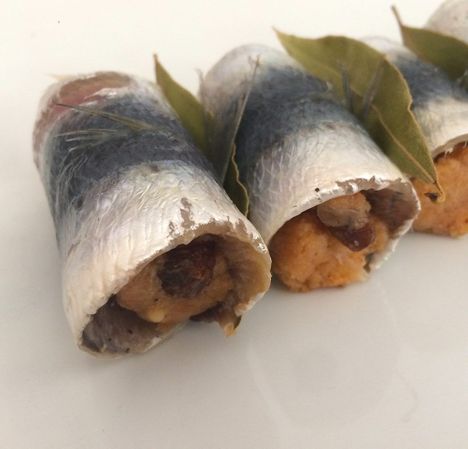 This delicious recipe comes to us from Roberta Corradin, food writer and co-owner of Restaurant Il Consiglio di Sicilia in Donnalucata, alongside her husband, chef Antonio Cicero. We visit them on tour in Sicily and enjoy a cooking demonstration of this dish, before dining at Il Consiglio.

The story of Sarde a beccafico: We don’t often enclose a food story with the recipe, but what Roberta tells us during the cooking demonstration we found worth sharing!

In the nineteenth century, noble Sicilian families would eat as a delicacy the bird known as the Garden warbler (beccafico in Italian). Its diet of fruits, most notably figs, led it to be quite chubby, which made it a savory treat. The Sicilian poor could not afford beccafico, so they created their own version, using a more readily available base ingredient: blue fish. To this day in Italy, blue fish is defined as small fish with bluish dorsal coloring and silver bellies, harvested in large quantities. Sardines (sarde), mackerel, anchovies and herrings are the most common blue fish. Known to be rich in Omega 3s, Vitamin D, iron and other nutrients, they have long been staples of Italian cuisine. As in much Italian cuisine, it is the poor person’s version that endures. The recipe for Sarde a beccafico (Sardines "in the style of beccafico") celebrates this ancient, dual, tradition.

Directions for Sarde a Beccafico:

***Directions for Zucchini a Beccafico:

If you like other veggies, try with eggplants (as previously, quickly sautéed to tenderize them) or cabbage (in this case, parboiled, for just a few minutes to tenderize the leaves). Buon appetito!