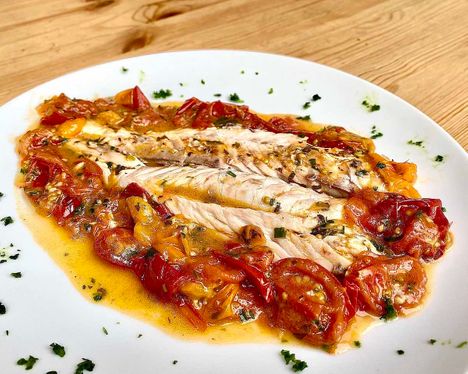 You might enjoy this recipe on our tours in Italy by the sea where this dish is quite popular. A delicious "secondo" ("main course" in Italian), it is typical in the south and usually enjoyed with a nice glass of local white wine.

Mimmo Corcione is a retired Neapolitan man who does not define himself a "chef" but is surely a "buongustaio" ("gourmet" in French and English). In 2020, we enjoyed watching his videos while "traveling" from our kitchen, following his traditional recipes.

The unusual translation "crazy water" does not have a clear origin. The story that makes the most sense to us involves sailors from days of yore. When traveling for days far out to sea, these scrappy chefs used to cook their fish using a combination of sea water and wine: Surely a crazy water mixture!

Sea water was both abundant and free, a far better option than "wasting" precious freshwater and adding salt that in the past would have been heavily taxed.

You can also prepare this dish baked with all the ingredients assembled into a tray beforehand. Preheat your oven to 400F. Cook for 15 minutes covered, then uncover for the remaining 5 minutes or until done. (Peronally, we prefer using the pan because it is faster and the resulting sauce is smoother.)